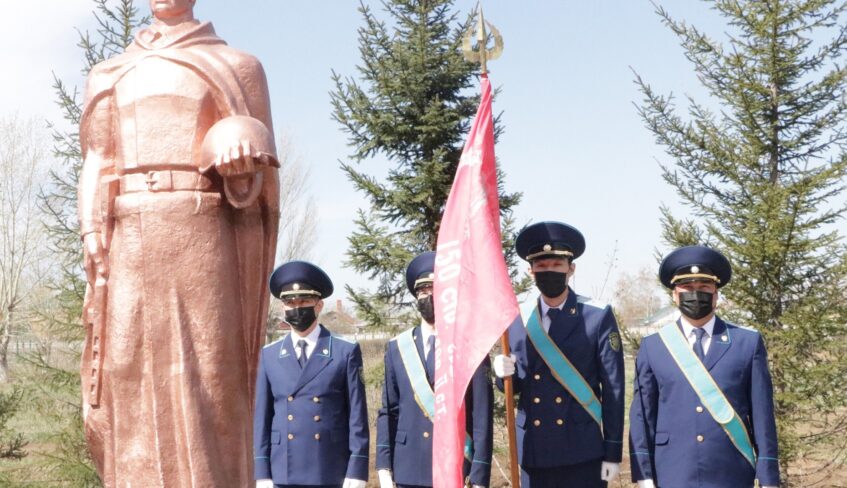 Today, at the Memorial of Glory on the territory of the Academy of Law Enforcement Agencies in Kosshy held a celebration dedicated to the Day of the Great Victory and the heroic feat of the valiant son of the Kazakh people Rakhymzhan Koshkarbayev.

Descendants of the front-line soldiers, representatives of the Central Council of Veterans, and guests came to honor the memory of the defenders of the Motherland. The honorary guest of the event was the hero’s sister – Rymzhan-apa Musabekkyzy.

The brave son of the Kazakh people remained in history as the first Soviet soldier who hoisted the banner of Victory over the Reichstag.

The most solemn and exciting moment of the holiday was the ritual of carrying out a copy of the historical banner. It was made in Moscow and solemnly handed over to Kazakhstan. The original battle banner is kept in the Central Museum of the Armed Forces of the Russian Federation.

In 2016, a monument was erected to Rakhymzhan Koshkarbayev in Astana. Its opening was a long-awaited gift for all Kazakhstanis.

Kazakhstan has made a worthy contribution to the Victory. More than 1.5 million people were mobilized from the republic. The motherland highly appreciated the military merits of the Kazakhstanis. Among the Heroes of the Soviet Union there are 528 Kazakhstanis, four of whom were awarded the title of Hero twice. 110 thousand were awarded Orders of Glory.

Only in Akmolinsk, 5 divisions and one autobatallion were formed and sent to the front. 15 thousand people were called to the front from the Akmola district. 80 soldiers from the villages of Kosshy and Taitobe, including Rakhymzhan Koshkarbayev, left to defend their Homeland.

The residents of the village remember and are proud of their legendary countrymen – the heroes of the war. Their names are carved on the obelisk of Glory. They keep the memory of the great feat of their fathers, grandfathers and great-grandfathers, remember it as a story of valor, high patriotism and fortitude.

The participants of the event laid flowers at the Obelisk of Glory, paid tribute to the memory of the fallen with a minute of silence.